An author at The Student Review, “an independent paper revival,” claims the BYU Honor Code restricts religious freedom.  He makes a compelling case, quoting Elder Dallin H. Oaks and Joseph Smith, the LDS Church’s founder.  I think I might agree but I would describe the Honor Code more as means BYU uses to control behavior rather than restrict freedom.  Interesting points were brought up recently in discussions on Facebook.  BYU students sign a contract to follow the Honor Code while pursuing their education at BYU, and the Honor Code (per The Student Review) says you have to be in “good standing” to graduate from the university.  Education at BYU is, in some sense, subsidized by LDS church tithes and donations; is it fair that someone enters as a Mormon, uses money donors think is going to the Mormon cause, and graduates as something other than a Mormon?  I’m not really sure, but I think the author of the article brings up valid points worth discussing and considering.

The author concludes with a quote from Joseph Smith:

Regardless of whether I agree, I guess I’ll stand by BYU’s (a private institution) right to enforce rules it sees necessary so I can maintain my freedom to worship how, where, or what I may–or not.  Is it too much to ask that BYU/the Church, in their efforts to squelch religious freedom at BYU, not over step their bounds to restrict my freedoms?

Facebook has been abuzz lately because BYU-I banned skinny jeans.  Even Jonathan Jones had something to say about it.  When I hung out with Jonathan back stage (I know, right) a few years ago he mention Rexburg (i.e., BYU-I) is one of his favorite places to perform.

And just in case you don’t believe that I’ve hung out back stage with Jonathan Jones, here are some pics.  I’m famous. 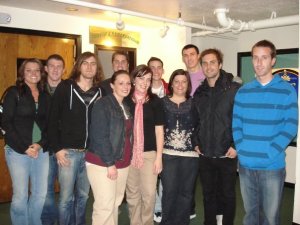 To my left (I'm in the blue hoodie shirt) is Jonathan Jones. Notice the skinny jeans.

Students were encouraged to have a visit with their Heavenly Father regarding their modesty.  I’m okay with the ban because the ban on skinny jeans, turns out, wasn’t really a ban, and let’s be honest: a lot of amusing things have been said and created in response to the commotion.  Here are some of my favorites.

This one is from Stan.

And this one is from some random girl on Facebook.

The only justification needed to ban skinny jeans.

And this one from… the testing center…?  I’m not sure where it came from but it’s been distributed widely on Facebook.

"...will you please go home and prayerfully visit with your Father in Heaven and recommit to...abide by the Honor Code"?

On a serious note, I find it interesting that none of the new reports have indicated whether men are also being kicked out of testing centers for wearing pants that are too tight for God.  Perhaps this is another manifestation of sexism at BYU?  As one blogger points out, women shouldn’t be held accountable for the thoughts men have (when they see BYU-I girls wearing skinny jeans).