Dear Phil Robertson, some of my best friends are gay.

Posted by Ryan on December 24, 2013
Posted in: Freedom of Speech, Social Issues. Tagged: freedom of speech, Phil Roberston, some of my best friends are X, TV tropes. Leave a comment

Dear Phil Robertson, some of my best friends are gay.

Until recently, when the  Phil Robertson / Duck Dynasty Debacle received a lot of attention on social media, I haven’t been the direct recipient of the catch phrase “some of my best friends are X”. (If you’ve been spared the debate about Phil, check out what he said during an interview with GQ. I’ll also post some snippets later on). At least not to my knowledge, anyway. And that’s what makes it tough to figure out why people say it. It’s not something you say in front of group X. You probably wouldn’t say, “Some of my closest friends are gay” when your closest gay friend is in the room. In fact, whatever it was people were talking about probably wouldn’t be talked about with the friend in the room. And that’s because that phrase is used in like-minded, closed circles.

So, I’m sure people have said it when thinking of me, but my very presence changes the conversation. And that’s what’s so interesting about social media: I can be there without really being there. I can watch the conversation unfold, speculate and observe, and not influence the course of the conversation.

So here’s what was said: 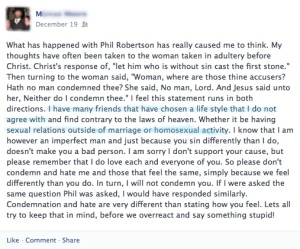 (I’ll let you decide for yourself whether it’s offensive or polite).

So regardless of whether it’s offensive or something else, it’s at least an interesting thing to say. And in case you missed it, in Mormon lexicon, “some of my best friends are X” plays out as “some of my best friends chose that lifestyle” (because choice, or free will as they call it, is something important and sacred to Mormons). Getting back to the discussion. Why do we (yes, even me) say things like this? When I’ve been tempted to say it, I was faced with the reality that maybe, quite possibly, I had some feelings, thoughts, and opinions about group X to sort out. And it’s so much easier to dismiss those thoughts than have someone apply a label to me: you’re [pick one: racist, anti-Semitic, homophobic, bigoted]. No one wants any of those labels.

It also helps build connection within my cohort: Yeah, we totally agree on this! Fist bump! 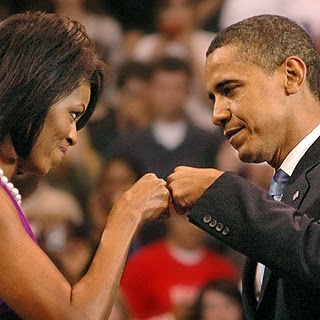 And let me connect with more people who think like me!

And now, getting to the heart of what I really want to write about and communicate: Can we strike this saying from our vernacular? Like really. I think it’s problematic because it stops us from thinking about some critical issues. 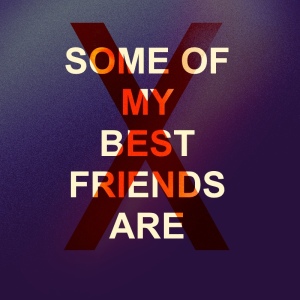 For starters, I know you have this best friend who is X and all, but do they agree with what you’re saying? As group X, I can speak up for myself on this one. If this acquaintance on Facebook was referring to me, our friendship is shallow in comparison to other friendships. We were roommates for a while (I was in the closet at the time), he invited me to a few parties, and I invited him to few social events. And I don’t agree with him on this topic.

Next, I don’t think we ever talked about me being gay (or choosing to live this dastardly lifestyle). We didn’t have any deep conversation that I can recall. Moreover, I didn’t feel comfortable coming out to him. And here’s why. I invited him to get ice cream with my gay friends. (At the time, I was only out to a few family members and friends and considered coming out to him). I don’t think he knew they were gay, but I think he suspected. When they weren’t around, he asked if one of them was gay in a tone that sounded annoyed and disgusted. I redirected the conversation because I didn’t want to him to be annoyed or disgusted with my me. We didn’t hang out much after that. A few years down the road, I tried to re-connect with him and invited him to watch a soccer game with my fiancé (now husband). I don’t think he knew we were engaged. I don’t know if he suspected anything because we didn’t talk about it.

Key phrase: We never talked about it.

Finally, I don’t think you really understand what my experience has been like. When I announced my legal wedding on Facebook, you weren’t among those who celebrated. You didn’t even leave a comment. When I changed my name on Facebook, it went unnoticed. Or you noticed but didn’t feel comfortable commenting or celebrating. That makes me think you haven’t put too much thought into my whole “group X” situation.

Getting back to the heart of things. I think this saying about besties in group X keeps you from thinking about the issue and helps you avoid being labeled as something you don’t think you are. And even though you’d never openly hate, you’d also never openly celebrate the good things happening in my life.

And I’m not writing this for you. I’m writing this for everyone who has ever used the saying “some of my best friends are X” to encourage you to never say it again. And it comes with a promise that if you don’t say it, you’re going to feel some uncomfortable feelings, hear some uncomfortable thoughts, and realize you have some opinions you’re not comfortable with. You’ll realize that even though you don’t have super harsh, offensive feelings, thoughts, or opinions about group X, you also don’t know that much about group X.

And that’s okay. At least as long as you experience the uncomfortable reality that you’re not [pick one: awesome, nice, supportive, hipster, etc.] like you thought and you’ve gone some growing to do.

What do you think? Share your thoughts Cancel reply